Millions of people are eager to spend Thanksgiving together, enjoying the festive meal with their loved ones. But this year, due to the ongoing inflation, the holiday will cost a lot more as families will need to spend more on travel, on heating and lighting their homes, and most importantly, on preparing the traditional Thanksgiving dinner.

The overall costs related to it are much higher than they were in 2021, while incomes have been rising at a much slower rate, unable to compensate for the raging inflation over the past year. This prompted BestBrokers to examine the actual numbers more closely and compare the growth rate of weekly wages and that of the traditional Thanksgiving dinner. Despite overall inflation of 7.7% in October, the cost of the Thanksgiving meal this year is over 20% higher than in 2021, according to data from the American Farm Bureau Federation. The average weekly wage last month, however, increased by only 3.82% when compared to October 2021. The graphic below shows that while the growth in earnings has slowed for the average American since 2020, the typical Thanksgiving dinner costs have gone up sharply. 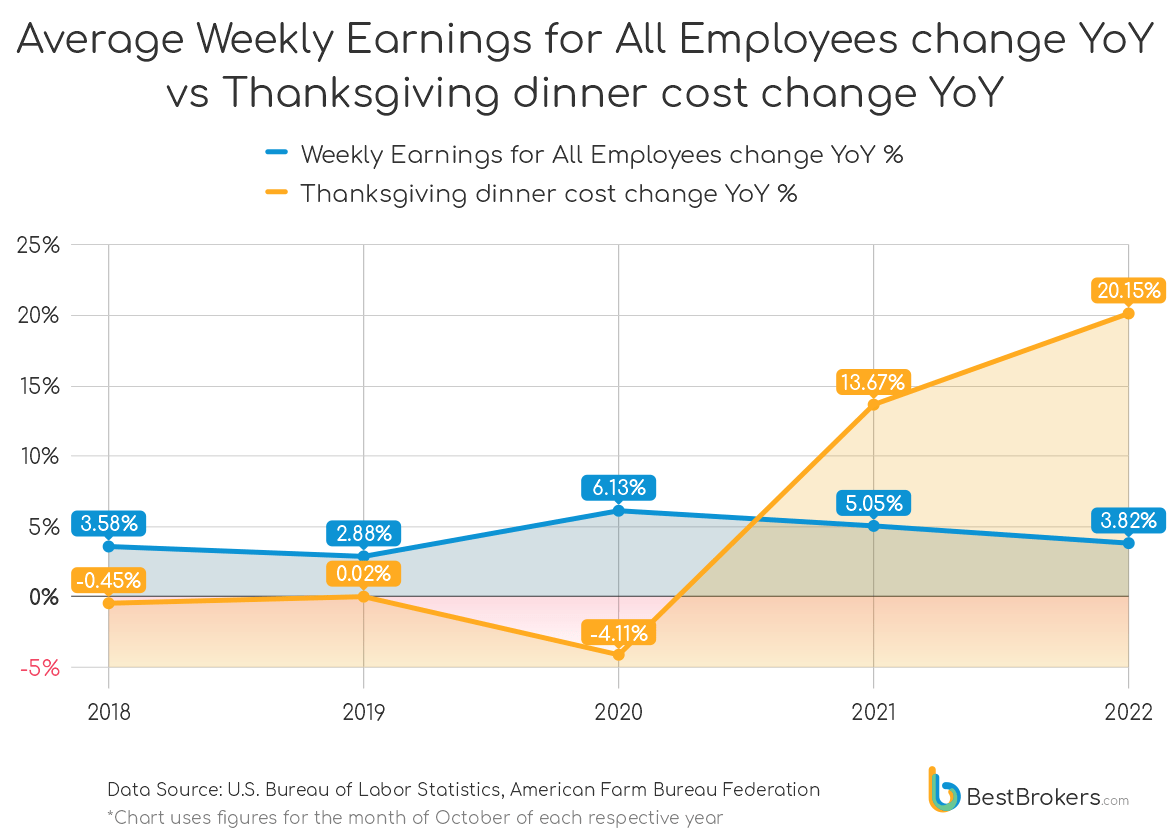 Thanksgiving dinner costs 20% more in 2022 while the Average Weekly Earnings are up just 3.82% compared to October 2021

Research from the American Farm Bureau Federation determined how much families have to pay this year for Thanksgiving dinner. Researchers, who have tracked the costs for the festive meal since 1986, have included 12 basic grocery items that make up a menu for 10 people. According to their latest data, the classic Thanksgiving dinner for ten costed $53.31 in 2021, while in 2022, it costs a record-high $64.05. This is a sharp increase of $10.74 or 20.15% in just one year.

However, this is not the only time the Thanksgiving menu basket has gone up in price over the past five years. Annual change in 2018 was -0.45%, 0.02% in 2019, and -4.11% in 2020 during the peak of COVID-19, which was characterized by lockdowns, sluggish economic activity, and a short recession. But the following year’s rebound impacted grocery prices, resulting in the Thanksgiving dinner price hike of 13.67% on a yearly basis.

It is interesting to compare the Thanksgiving dinner inflation with how the country’s average income changed over the same period. According to the U.S. Bureau of Labor Statistics, the average weekly earnings in October were $1,124.01, up 0.37% from September when employees in the US earned $1,119.87 on average. This is up 3.82% from October 2021 when the weekly earnings stood at $1,082.63.

Note that the current minimum wage in the US, which has not been raised since 2009, is $7.25 an hour. The average wage in October then seems much higher than the federal minimum – even for a 60-hour working week, employees received more than twice the required minimum or $18.73 per hour. And the average blue-collar hourly wage was $28.10 last month. However, this seemingly high wage can buy employees fewer things than it could just a few years ago.

For instance, Americans could afford almost 22 Thanksgiving dinners in 2020 with their weekly wage, based on the prices back then. In 2022, an average weekly wage can buy them 17 dinners.

October’s inflation rate was extracted from the latest Consumer Price Index report published by the U.S. Bureau of Statistics on November 10. Figures for the average weekly wages are from FRED, Federal Reserve Bank of St. Louis, which cites the Average Weekly Earnings of All Employees, Total Private by U.S. Bureau of Labor Statistics. We also used data from the American Farm Bureau Federation, which publishes the prices of the Thanksgiving dinner menu in October of each year.