The United Kingdom is slowly shifting towards a greener economy, and as a major part of the decarbonisation plans, the transition to electric vehicles is already underway, with all petrol and diesel cars set to be banned from sale in 2030. Sales of electric cars have increased dramatically over the past year, reaching record-high numbers in December.

The latest car registration figures show that in 2022, the new car market experienced a 2% decline in all segments but EVs and hybrids. EV registrations soared by 40% from 2021 to more than 267,000 – over 42,200 purely electric battery cars (BEVs) were registered in December alone, versus 42,000 petrol cars.

The quick adoption of EVs, however, requires the development of an extensive charging infrastructure capable of serving the rapidly increasing number of electric cars. The team at BestBrokers looked at the number of charging points currently in operation and discovered that even with the 8,800 chargers added over the past year, the installations could very soon be struggling to meet the growing demand. 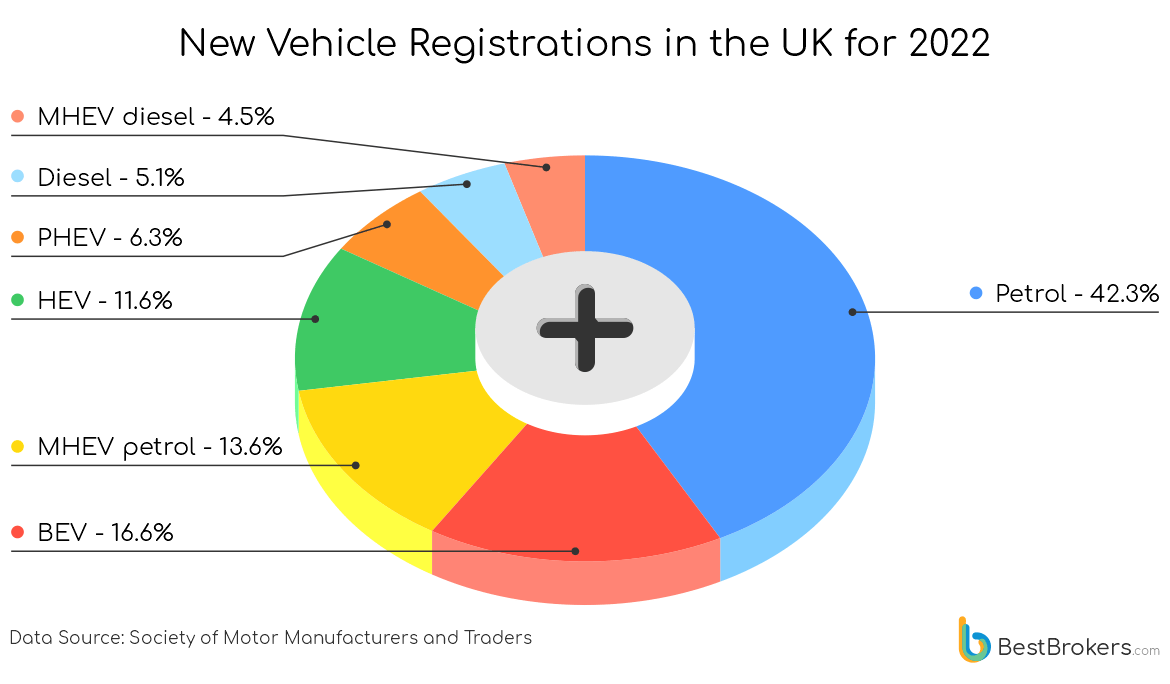 The latest figures from the Society of Motor Manufacturers and Traders show that in December, battery-electric vehicles (BEVs) represented the largest share of new car registrations. At 32.9% of all registrations, or 42,284, BEVs made up nearly a third of all newly registered cars. This is an increase of 52.62% from the same month in 2021, when 27,705 BEVs were registered. Moreover, the combined market share of BEVs and hybrids reached 50.1 per cent for the month. 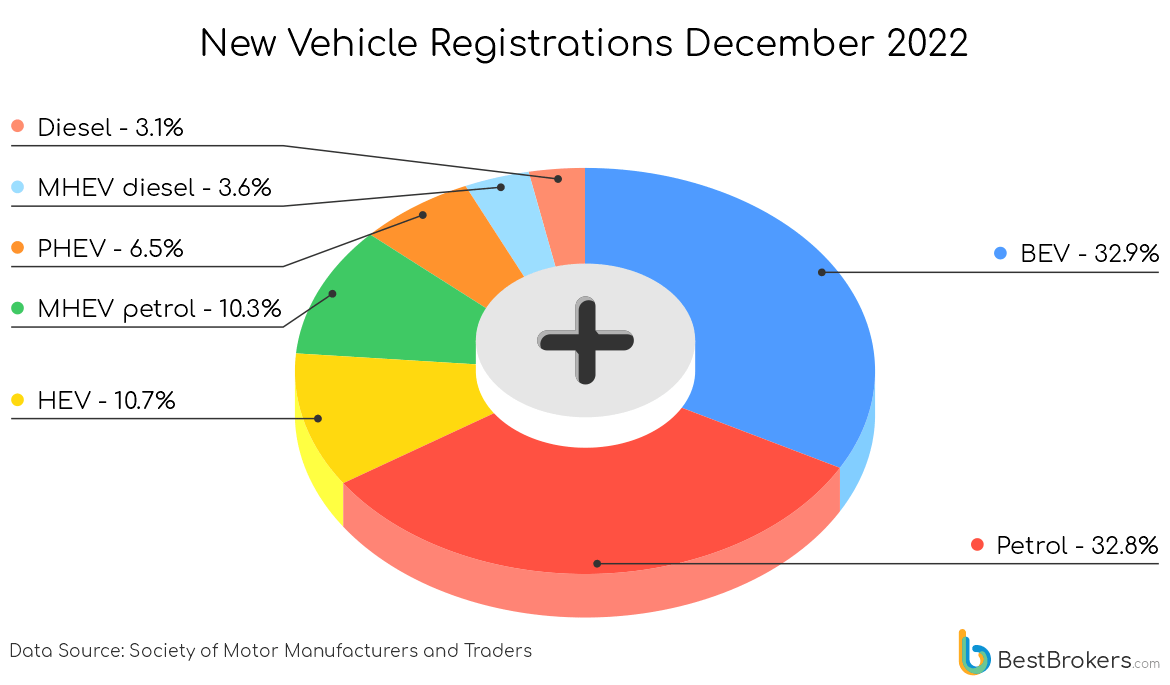 The rising demand for electric cars and the gradual shift to a net zero economy require the construction of a massive charging infrastructure across the UK. Both the government and the business seem to recognise the importance of charging points, as over 8,803 new installations were built in 2022 alone. This is a record-high number for the UK, close to the total number of petrol stations in operation, which are estimated to be around 8,300.

These numbers are not comparable, however – a charging point can only charge a single vehicle, whereas a petrol station has multiple fuelling positions. According to the Retail Marketing Survey by the Energy Institute, the average number of fuelling positions per petrol station increased from 7.1 in 2006 to 7.3 in 2011. Even when basing calculations on the number 7, it makes 58,100 positions serving roughly 40.4 million ICE vehicles (petrol or diesel) or one fuelling position per 695 cars.

As for the ratio of EVs to charging points, it is very different. At the end of December, there were 37,261 public charging points, and it is estimated that there are more than 660,000 battery-powered electric vehicles on the roads across the United Kingdom. A further 445,000 plug-in hybrids bring the total to more than 1.1 million units, although these types of cars are rarely charged at public charging points – the PHEV batteries can be charged through a charger, by the ICE, or through regenerative braking.

If there are 660,000 EVs, this means that there is an average of 17.7 charging points in the UK per EV. One petrol station can easily serve 600 or 700 ICE cars – it would take up to 8 hours to fill that many tanks with fuel. But, depending on the type and power rating of the charging point, such an installation can usually charge one EV for 1 to 8 hours. According to Zap-Map, which tracks the number of charging points in operation across the United Kingdom, the vast majority of charging points are fast, meaning they can fully charge a BEV for 3 to 4 hours.

Types of charging points by speed:

Slow charging points are usually rated up to 3kW (although some may be more powerful) and are used at home or at office buildings since charging takes 8 to 10 hours. Fast charging points are either 7kW or 22kW and are often installed in car parks, supermarkets, or leisure centres. Charging a BEV takes 3 to 4 hours. Rapid chargers, found at petrol stations, motorway service stations, and supermarkets are often rated from 43kW (25kW to 99kW). Although they can charge a battery within 30 to 60 minutes, they are only compatible with EVs that have a rapid-charging function. The same applies to ultra-rapid charging points where it takes roughly 15 minutes to fully charge an EV, but only a small number of vehicles can use them.

Are UK’s Charging Points Enough to Serve All EVs?

The current actions as part of the emission reduction efforts may not be sufficient to achieve the overly ambitious goals set in the past few years. The government’s target is a minimum of 300,000 installations by 2030, including at least 6,000 rapid charge points across England’s motorways and major A-roads. This means that for the next 7 years, we need to build more than 37,500 charging points each year, or roughly 103 chargers every day.

Backed by £1.6 billion, the government’s Electric Vehicle Infrastructure Strategy aims to support the construction and integration of a robust charging network that will cover the entire country. The £950 million rapid charging fund will support the building of high-powered chargers for those people who are making longer journeys, while local authorities will be aided by funding of £500 million to increase local chargepoint coverage.

Another important fact is that home charging is crucial, as most people would prefer charging their EVs during the night and having them ready to go in the morning. It is estimated that even now, there are roughly 400,000 home charging systems in the UK. Still, some experts believe that there should be one public charging point per 10 to 15 EVs. When the 2030 ice vehicle sales ban comes into effect, people will still be able to drive their cars but all new registrations will be EVs.

If we have 1.6 million newly registered EVs in 2030, they will require at least 106,600 charging points. Add the existing 2.4 million EVs (considering the annual BEV sales remain at around 250,000), and you would have a minimum of 4 million EVs at the end of 2030. The charging network would then need to include more than 266,000 charging points in operation. This will only work if we manage to step up the construction efforts and are capable of installing a hundred charging points every day.