Although being around for decades, electric vehicles have rapidly grown in popularity only in the past few years. More people are now looking for a car that is cheaper to run and maintain than conventional gasoline cars, and one that comes with net zero carbon emissions.

Many countries around the world have introduced plans to reduce their carbon footprint. And a huge part of these plans includes the phasing out of gas cars. Europe is leading in these efforts – in January, the EU agreed to end sales of combustion engine vehicles by 2035. But the change is coming to the U.S., too. In late August, California approved a ban on the sale of new gas-powered vehicles by 2035, and four other states have taken steps to follow suit. Another 15 states have backed California’s zero-emission vehicle requirements.

This raises one question – are Americans ready to switch to electric vehicles considering their love for bigger, faster, and more powerful cars? In search of the answer the team at BestBrokers analyzed and visualized data from a recently-released nationally representative survey by Consumer Reports, entitled "Battery Electric Vehicles and Low Carbon Fuel". The answer might turn out to be more conclusive than one would expect.

The U.S. car market is still largely dominated by gasoline-powered vehicles but interest in electric vehicles has grown rapidly according to the most recent survey by Consumer Reports. The survey finds that 71% of consumers in the U.S. express interest in buying or leasing an electric-only car if they were to get one today.

14% of Americans say they would “definitely” buy/lease one, an increase from 4% who said the same in a similar survey in 2020. Another 22% of respondents say would “seriously consider” buying or leasing an EV, and 35% “might consider” one. At the same time, only 2% say they currently have a battery electric vehicle (BEV), while 3% have had one in the past.

When asked what would make them consider an EV, most people point out that the most important factors are cost-related. 33% say that it costs less to charge an EV than to refuel a gas car, 31% say lower lifetime costs and 28% say lower maintenance costs.

Interest in EVs Peaks in 2022 in Terms of Sales

Interest in a particular product does not always translate into more sales but it seems to be the case with EVs in the past two years. The International Energy Agency has estimated that electric car sales nearly doubled year on year to 6.6 million in 2021. They accounted for approximately 9% of the global car market, which was 4 times their market share in 2019.

Half of all sales were made in China, followed by Europe where 2.3 million EVs were sold. With 630,000 sales last year, the United States accounted for 10% of the market. The figures do not include fuel cell electric vehicles (EVs that use hydrogen fuel cells) or full hybrids (the battery only provides enough power for driving the car at slower speeds). The IEA report includes only battery electric vehicles (BEVs) and plug-in hybrid electric vehicles (PHEVs).

Sales in the U.S. really picked up in 2022 – there was 60% increase in EV registrations in the first quarter of 2022. Although they still only make up around 4.6% of the overall new-car market, their share is expected to increase more rapidly in the coming years.

Figures vary slightly across reporting organizations but according to Cox Automotive, sales of battery-powered EVs jumped to 196,788 in the second quarter of this year, a record high and a 13% increase from Q1. This is also a 66.4% jump from the same period in 2021. Meanwhile, the overall new-car market slowed down with an estimated y-o-y decrease of more than 20%. Sales of hybrids (HEVs) and plug-in hybrids (PHEVs) also dropped in Q2. Still, electric car sales in all categories currently make up 12.6% of the total market. Sales of pure EVs account for 5.6% of the total market. 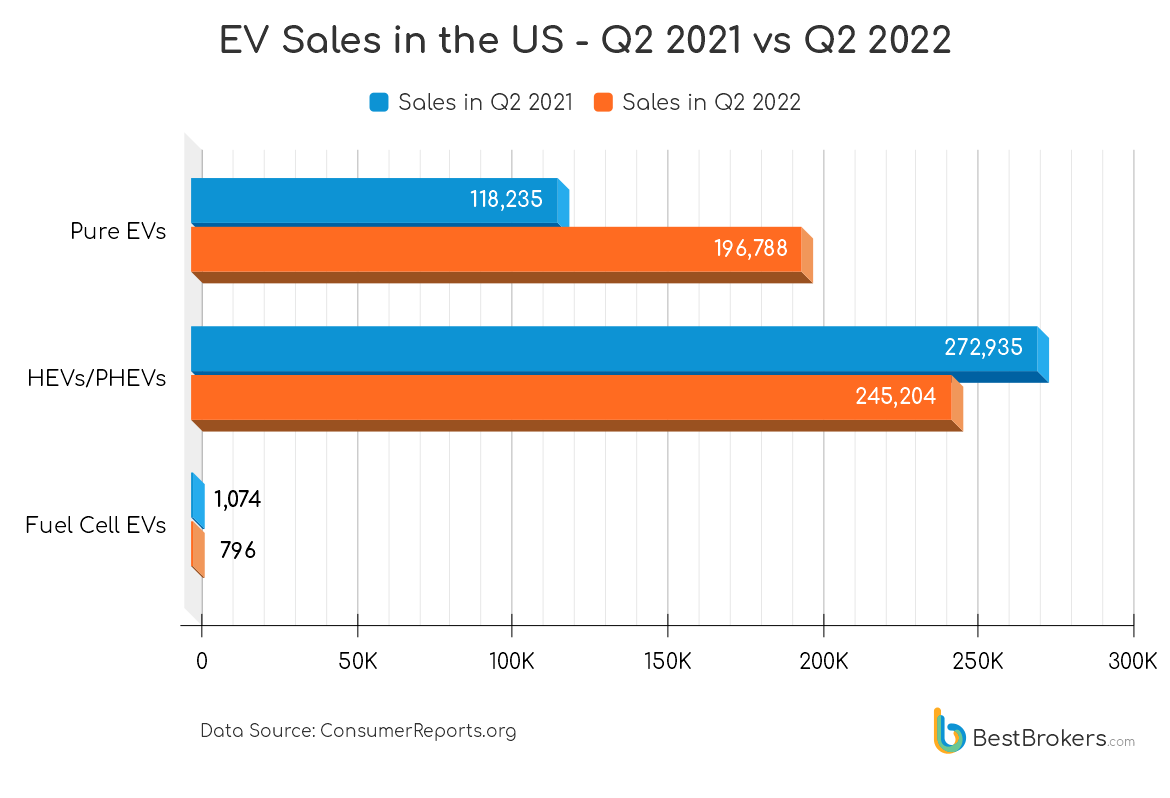 Less Than a Third Won’t Buy an EV

Researchers asked those who would not consider getting an electric car (28% of all surveyed) about the reasons behind their reluctance. The top 3 barriers to buying or leasing an EV were charging logistics (61%), the number of miles the vehicle can go before it needs to be charged (55%), and the costs involved with buying, owning, and maintaining an EV (52%).

Additional questions were asked to those who pointed to cost-related or charging concerns as to what would prevent them from getting an electric car. The main cost-related factors were purchase price (58%), maintenance and repair costs (40%), cost of installing a home charger (30%), and battery replacement costs (29%).

Of those who indicated having doubts about the charging logistics of an EV, 59% said there were not enough public charging stations. Other issues mentioned as barriers were a lack of place at home to plug in the car (59%), inconvenience of charging (42%), and long charging times (37%).

Nearly Half of Americans Unaware of Incentives

According to the survey, nearly half of U.S. consumers (46%) are unaware of the incentives available to purchase an EV. 34% say they have heard about tax rebates or discounts being offered at the time of purchase or lease. 28% of people knew about tax credits applied at a later time and 18% have heard about certain discounts when installing a home charger and about exemptions from vehicle emissions inspections.

When asked what incentives would encourage them to get an EV, 53% of respondents indicated that these would be tax rebates or discounts when purchasing the vehicle. Others said discounts to install a home charger (49%), tax credits applied at a later time (45%), discounted charging rates (41%), and government incentives for used electric-only vehicles (41%).

The shift to EVs is picking up speed in the US with increased demand from consumers and federal incentives for manufacturing car batteries on US soil. 2022 has been a busy year for auto makers in the US who spent billions in the construction of new car assembly factories and battery facilities. The supply chain disruptions over the past few years due to the Covid-19 pandemic have put pressure on the industry to find new suppliers of parts and materials. The Russian war in Ukraine came with new restrictions, highlighting the importance of creating a domestic EV supply chain.

According to the Center for Automotive Research, cited by the Wall Street Journal, car manufacturers have revealed investment plans totaling roughly $33 billion in 2022. The projects include the construction of car assembly factories for $10.71 billion, while spending on EV battery plants was even greater – around $22.34 billion. These figures are hardly surprising, considering President Biden’s pledge in May to provide $3.1 billion in funding to support US EV battery manufacturing.

In August Honda Motor Co. announced plans for a joint venture company with LG Energy Solution to produce lithium-ion batteries for Honda and Acura EV models. The new $4.4 billion plant would be built in the US. Another company to partner up with LG was General Motors Co., which opened a new battery factory in Ohio. It would add another two facilities, in Tennessee and Michigan. Meanwhile, Toyota is building a $3.8 billion battery production factory a North Carolina. Ford, Hyuindai, and Stellantis have also poured billions in EV projects that are currently underway.

Manufacturers’ investments in new assembly and battery-making facilities on US territory are likely to increase in 2023, fueled by the rise in demand but more importantly, by the intent to resolve the supply chain issues of the past few years”, comments Alan Goldberg, a market analyst at BestBrokers. “While manufacturing could be brought back to the US, car makers still face possible materials shortages as key minerals are mined by the likes of China, Russia, and the DRC.

Data was gathered from a nationally representative survey of 8,027 American consumers, which was released in July by nonprofit consumer research organization Consumer Reports. It was conducted in late January and February online and by phone. Respondents were U.S adults ages 18 and older (average age of 48 years old), 52% were female, 62% were white, non-Hispanic, and 57% had a household income of $50,000 or more.